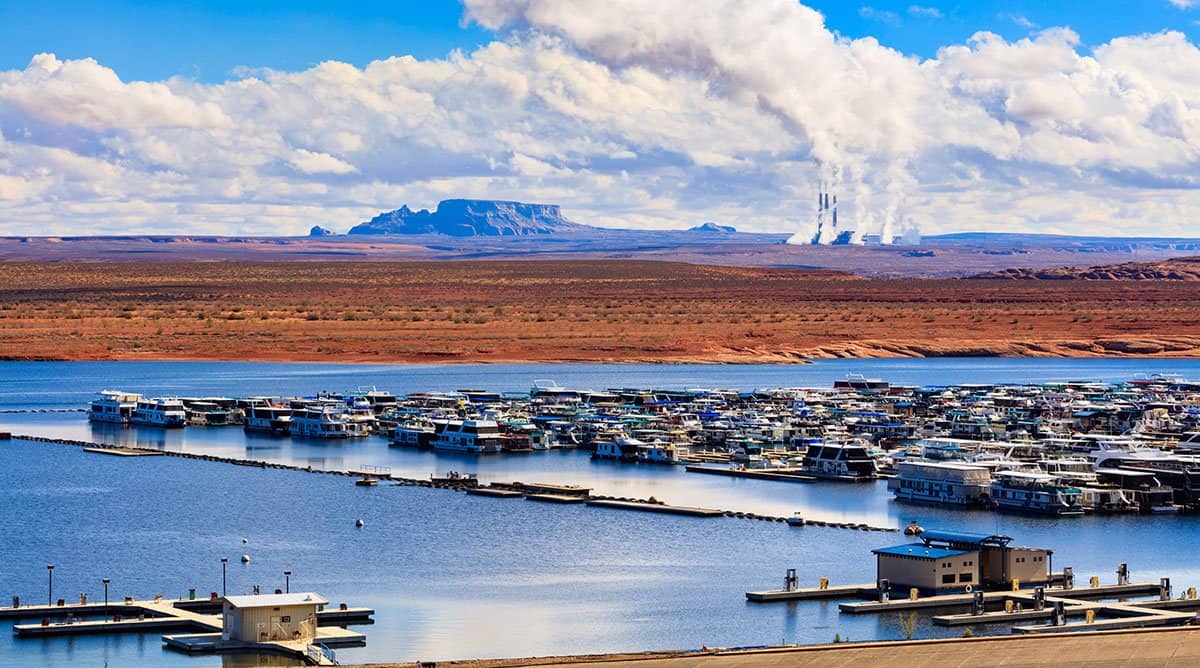 I mean, they both float, right?

While they do share some features, they are two vastly different types of boats.

A houseboat is a floating house that is typically attached to a port and used as a permanent residence. Although many houseboats can move through water, they are not built to handle rough seas. Yachts, on the other hand, are built for recreational purposes, like racing and getaways.

These floating constructions differ in build, purpose, and price. Whereas the yacht was built to surf the waves at medium to high speeds, houseboats were built for calmer waters and a much more static lifestyle.

Let’s look more into the differences between these two vessels.

The main differences between the two can be broken down into three categories: appearance, purpose, and liveability.

Appearance is an obvious difference between these two. A houseboat looks like a small, floating home, while a yacht resembles the typical image of a boat.

A visible difference between these two is their hull. Hulls are a crucial component of aquatic vessels, since different hulls perform differently. While a houseboat’s hull is most commonly a flat bottom hull or a semi v-hull, a yacht usually has a planing hull for speed and agility.

Houseboats aren’t made for rough waters. Houseboats are made to travel on lakes and interior parts of the sea, like bays and gulfs. A well-made yacht, however, can cut across some of the roughest oceans with ease.

Yachts are categorized according to their seaworthiness:

Houseboats are built to remain close to shore. Even though there are large houseboats out there, they’re still not crafted to take on the massive hits of ocean waves.

Many houseboats don’t even have an engine and have to be towed. Since houseboats usually are not intended to be moved, adding an engine would only increase the cost and add unnecessary maintenance costs.

Living on either of these boats is, of course, possible. But, for the average person, a yacht is either very small or entirely out of reach in terms of finances.

For livability, if you’re looking for an alternative home, a houseboat is much more practical for day-to-day living than a yacht.

The floor plan for a houseboat is more similar to that of a house, while the yacht is closer to the layout of a typical boat. The houseboat is fully equipped to house a family, with one or more living rooms, a kitchen, bathroom, and bedrooms.

Compared to a yacht, the houseboat is closer to the layout of a house, this is especially due to its shape. Since a houseboat has a similar shape as a residential home, the floorplans and separations are also more or less the same as a small house.

These floating homes were made to house a modern family comfortably. At times, these homes are considered a better option than conventional houses because they are more cost-effective. Especially for people living in areas with high property prices.

Other than the floating foundation, a houseboat is more or less a normal, albeit small, house and it shares more features with a house than with a typical boat.

As mentioned, yachts were designed for weekend getaways, boat parties, and sports activities. Thus a yacht is a great option for a vacation home.

A yacht is more similar to a speedboat but includes several added comforts. For instance, most speedboats have no indoor living spaces, its only furniture being a captain’s seat, a bench, and the occasional low table.

This is where the yacht’s similarities to the houseboat can be seen. The yacht has several rooms (cabins) just like in residential homes (depending on the size of the vessel).

At first glance, the yacht may appear a comfortable home, but unless you have a luxurious yacht, it usually lacks sufficient space for long-term living. In addition, as yachts are built to handle rough seas they have a very low center of gravity, thereby limiting headroom.

The biggest and most comfortable yachts are very expensive. So, from a financial point of view, for a home intended for alternative living, the houseboat is usually more cost-effective.

Despite all the features that are added for comfort in modern yachts, houseboats are often a more favorable option for permanent residence because of the cramped space of small and medium-sized yachts.

For example, both of these vessels need to use materials that are either water-resistant or waterproof. However, the waterproof material for the hull of the yacht has to be able to withstand strong waves as well. On the other hand, several people reinforce their houseboats by adding a coat of waterproof paint.

As yachts need to be light and sturdy, the materials and expertise required generally cost more than that of a houseboat.

Although yachts generally are more expensive relative to their size, there is a significant price overlap between the two boat types. A new houseboat can be very expensive whereas smaller and/or used yachts can be found at very affordable prices.

Houseboats and yachts do share some similarities, but they also differ significantly. The former is designed and built to be a floating home. Even though yachts can be lived in, they were created first and foremost for recreational purposes.

Hi, my name is Rasmus. I'm a huge fan of alternative living arrangements and the many ways people are escaping the 9 to 5 grind. Whether it's van dwelling or homesteading, if it allows for more freedom in your life then I'm all ears! I've been exploring different aspects of this lifestyle for over three years now and have learned so much. From solar power to worm farming, if there's something out there that helps us live differently - I want to know about it!

link to How Long Will A Treehouse Last? (Answered!)

A treehouse is a big investment. It can be a place where you can go for fun. If you consider a treehouse build, you might wonder, how long will a treehouse last? How Long Will a Treehouse...

Continue Reading
link to Are Treehouses Taxable? (What You Need To Know!)

A treehouse allows you to relax with your family or friends while taking in natural beauty.  If you are thinking about adding amenities to your home, you might wonder, 'Are treehouses...

Hi, my name is Rasmus. I'm a huge fan of alternative living arrangements and the many ways people are escaping the 9 to 5 grind. Whether it's van dwelling or homesteading, if it allows for more freedom in your life then I'm all ears!

I've been exploring different aspects of this lifestyle for over three years now and have learned so much. From solar power to worm farming, if there's something out there that helps us live differently - I want to know about it!

FreedomResidence.com is a participant in the Amazon Services LLC Associates Program, an affiliate advertising program designed to provide a means for sites to earn advertising fees by advertising and linking to amazon.com