Many people want to know if it is safe to be inside a yurt. It’s not just bears, storms, and hurricanes that they worry about when they are considering the safety of staying in this type of lodging – lightning and burglaries are a common concern as well. But luckily there are many things you can do to mitigate all of these risks.

In this article, we will cover some of the different dangers that exist for those who choose to spend time inside these dwellings, and how you can limit your risks.

What Is a Yurt?

A yurt is a circular, portable dwelling that can be relatively easily moved and set up on the ground or mounted on a wooden platform. They were originally invented by nomadic peoples who needed to move regularly to find fresh grazing land for their livestock. Although yurts are commonly associated with Mongolia, they were also popular in other parts of Asia. The word “yurt” comes from the Turkic language means “dorm”, while the Mongolian name is “Ger”.

They have been used for hundreds of years by Central Asian nomads, and more recently as an accommodation option for those who want to experience this type of lodging on retreats and, more and more often, as permanent housing.

Are Yurts Safe From Bears?

One worry that many people have about yurts is how safe they are from bears and other wildlife. This is a valid concern, as bears are very strong (and strong-willed) animals.

Bears are capable of breaking into yurt walls, and there have been documented cases where this has happened. These large mammals are able to rip rotten logs apart to get at ants and beehives, a yurt consisting of lattice walls and a fabric cover is not a match for their sharp claws and powerful jaws.

Should you then be worried about a bear breaking into the yurt while you are home? The short answer is: not if you take the necessary precautions. There are many ways that you can make your yurt more bear-resistant, and some of them are inexpensive and easy to do. Some steps include:

If you live in bear country, learn about their habits and what to do in case of an encounter. If proper precautions are taken, you are very unlikely to encounter a bear inside the yurt. Typically, bears are very docile and usually avoid people altogether, unless they smell food. If you want to feel extra safe, keep a can of bear spray around, and make sure you know how to use it.

Depending on where you live, there may be a much higher likelihood of two-legged intruders than four-legged. And while humans are not nearly as strong as a bear, they may be more cunning.

Generally, yurts are safe against opportunistic intruders. One may worry that someone can get through the wall, but what would require not just cutting open the cover – the strong lattice walls also make an extra layer of protection against unwelcome visitors.

A very determined burglar would be able to get in, but so would they an ordinary house or most other types of dwellings. They would be more likely to try opening the door or a window than breaking through the walls.

If you’re concerned about safety, whether it be a home invasion or elevated crime rates in your area, use reinforced doors and windows as well as security alarms. Movement-activated security cameras are a good way to monitor the perimeter without taking away privacy from you or your family.

As yurt covers are often made from cotton and other flammable materials, they are potentially vulnerable to fire. Combine this with the fact that many yurt owners prefer to heat their homes using residential woodburning stoves, the risk of a yurt fire is not insignificant.

The light-weight materials often make yurts susceptible to catching on fire from sparks or embers coming from the woodstove or other sources. Fires can also easily spread inside a yurt because they have no walls separating rooms. Some yurts are built with flame-retardant materials, which is recommended.

A way to prevent a yurt from catching on fire is by installing smoke and heat detectors, which will alert the occupants in the event that there is an emergency. A fire extinguisher is also a wise investment. Also make sure to clean the stovepipe regularly to avoid the buildup of creosote, which is highly flammable and can lead to chimney fires.

One way to minimize fire damage is to have an automatic or manually operated sprinkler system installed inside it, putting out any fires before they start spreading. While this is an option in some types of yurts, many are not designed for this, and many others don’t even have running water or the volume needed for this.

If the yurt is on a campsite or you enjoy cooking outdoors, the area around the yurt should be cleared for at least ten feet from any fire hazards, as well as combustible materials such as hay bales or fallen tree branches. If you’re close to a forest with dry underbrush and low-lying leaves on top of the ground, it would also be wise to take precautions against forest fires.

How Well Do Yurts Stand Up To Weather?

Yourts are not like tents in terms of how they will hold up in wind, rain, and snow. Tents are usually meant to be taken down by the end of a trip or shortly after it starts, whereas yurts are much heavier and are better able to withstand harsher conditions.

The wind on the Mongolian steppes can be strong enough to knock down a person, but it won’t blow over a well-built and properly maintained yurt.

A very small yurt can be relatively lightweight, but a more permanent medium-sized model will typically weigh somewhere between 1,000 and 2,000 pounds. In addition, their relatively “flat” and aerodynamic shape will help them to withstand strong winds.

That does not mean yurts safe from all sorts of weather, but they can withstand a lot with no structural damage. Many yurts as also anchored to the deck, making them even more secure against high winds. And cable tie-down also an option for those living in hurricane-prone regions.

Do Lightning Strikes Pose a Threat?

Unlike metal constructions such as container homes and some mobile homes, yurts are more vulnerable to a direct lightning strike, but they will not attract lightning, either.

The general assumption that metal attracts lightning is greatly exaggerated. A conductive object is only going to attract lightning if it’s already about to strike the very nearby vicinity. In reality, a 10-foot tall metal construction will only attract lightning bolts that are within 10 feet of it.

Nonetheless, that does mean yurts (being made from wood and fabric) are slightly less likely to attract a lightning bolt than some other types of buildings. The bad news is that they are also much more exposed in case they do get hit.

While metal buildings will work as a Faraday cage and direct the electrical energy into the ground, yurts are likely to be caught on fire and/or get destroyed by a lightning strike.

Lightning striking your yurt is extremely unlikely to ever happen. However, if you want the peace of mind, one way to protect your home is to set up a lightning rod. This is a tall metal rod that will attract the (nearby) lightning to it and protect the yurt as it leads the electricity into the ground. 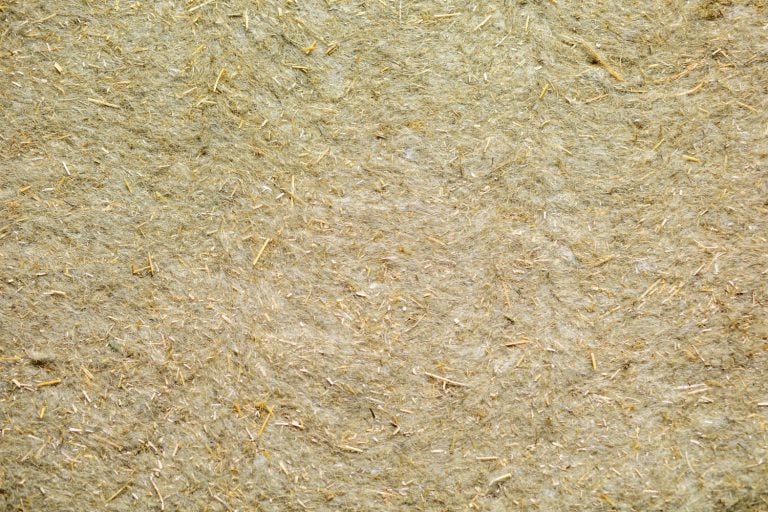 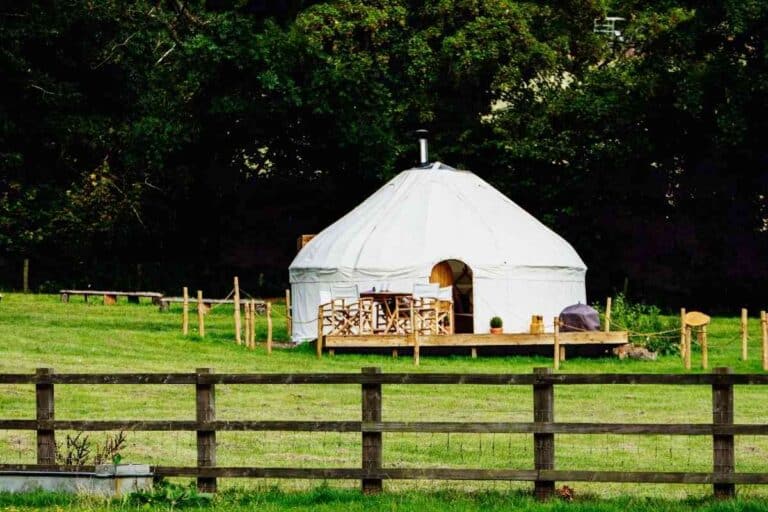 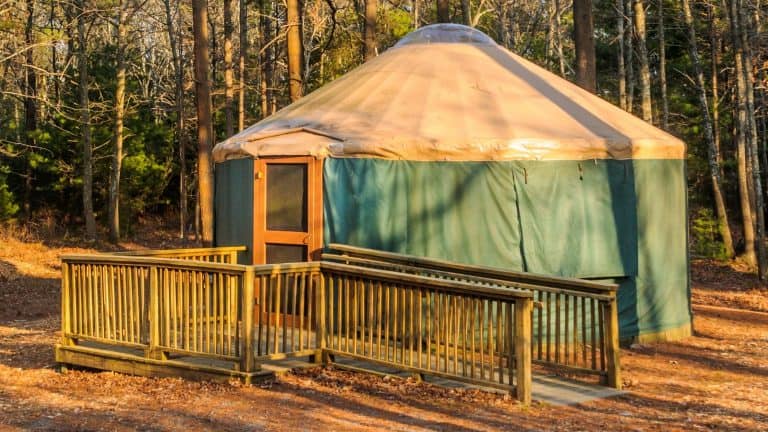 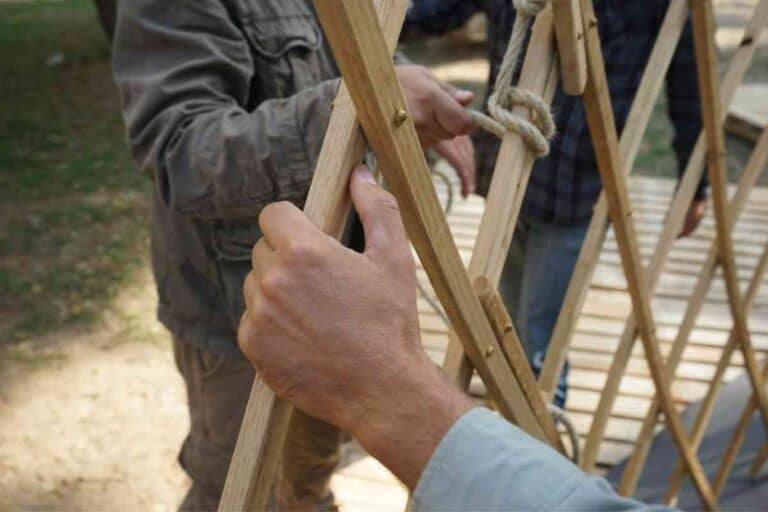